In this blog post we will try to understand the ideas introduced in the FixRes paper published by the Facebook AI Research team.

We will implement the method described in the paper while training a ResNet-50 model from scratch in PyTorch, on the Cassava leaf disease classification dataset from Kaggle.

Finally, we will see how we can use this method in fast.ai with transfer learning.

The paper shows that existing data augmentation techniques introduces a significant difference in sizes of objects that a CNN sees during training and testing.

During training, it is common to extract/crop a random region of classification from an image and then resize it to a resolution that is compatible with the CNN architecture.

For example, the crop would be resized to 224 x 224 when using AlexNet. However, some architectures like ResNet don't have such a requirement. Even in this case, all images within a batch need to be resized to a common resolution.

This kind of augmentation is what we get with RandomResizedCrop in PyTorch.

(Source) RandomResizedCrop randomly selects different areas in the input image and resizes them to the same size.

During testing, however, we just extract a center crop of the size we would like to feed to the model.

The result of this difference during training and testing is this: 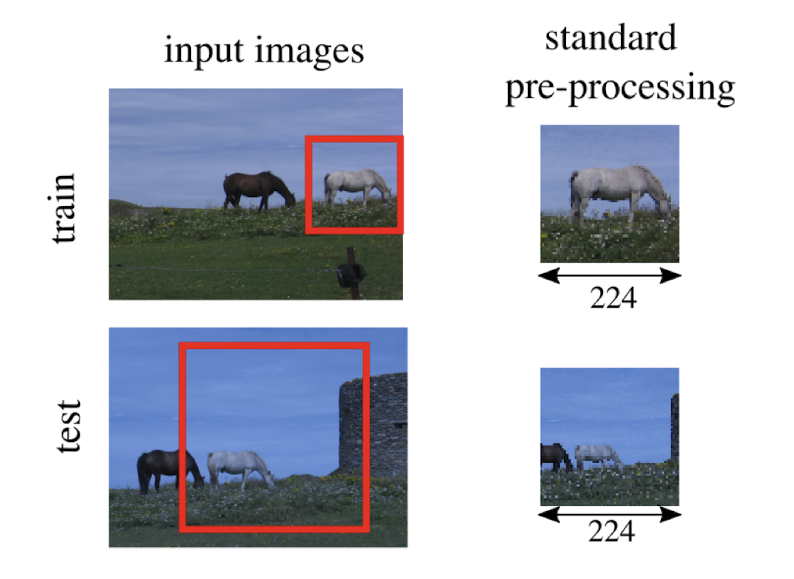 This image shows that although we are providing the same resolution of images to the model during training and testing, the scale of horses that the model sees during these phases is different.

This is because the nature of preprocessing used tends to zoom on objects, resulting in a larger horse during training compared to testing.

This is a problem because convolutional neural networks do not have "built-in scale invariance", i.e. they are sensitive to the sizes of objects in the images used to train them.

To fix this discrepancy in the apparent size of objects during training and testing, the authors propose two options:

As a result, the model will see horses of the same size.

This means that during test time, some objects may appear to be just a third of their size during training time!

With standard pre-processing, the authors claim that objects at test time are on average 0.8 times what they appear at training time.

If we choose to increase the resolution of images during testing instead, then we need to make them 1/0.8=1.25 times the resolution used during training.

For example, if we have images of resolution 224 x 224, we could adjust the resolution in one of the following ways:

Wouldn't life be so wonderful if everything "just worked" when we did this?

Unfortunately, the authors discovered that changing the resolution of images during testing significantly skews the distribution of activations in the model. 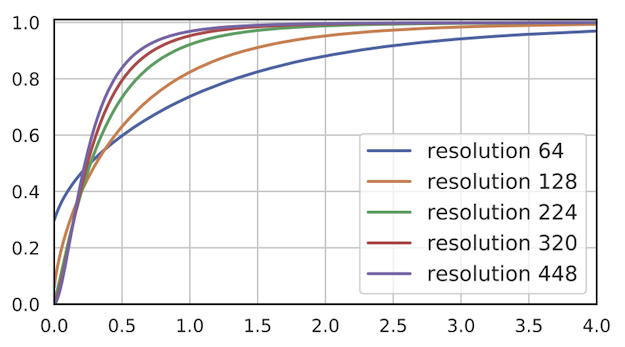 This graph shows the cumulative density of activations after average pooling layer for a ResNet-50 trained at a resolution of 224 and tested at the different resolutions shown.

If the distribution of activations significantly change at test time, their values will not be in the range that the final classifier was trained for. As a result, the accuracy of the model will suffer.

When the distributions of activations change as described in the previous section, the last few layers of the network are affected most.

The earlier layers of a convolutional neural network that consist of convolutions, activations and other similar layers remain largely unaffected.

The authors mention two ways to deal with these skewed activations:

The authors mention that parametric adaptation provided a measurable but limited improvement in accuracy. Therefore, we'll focus on how to fine-tune the model instead.

A change in resolution of images at test time is effectively a domain shift, and a common way to deal with domain shift is fine-tuning the model.

When fine-tuning the model we use the same images from the training set but with a higher resolution.

The authors also mention that we need to fine-tune the last few layers of the model which includes any batch normalization layer that precedes the pooling layer. 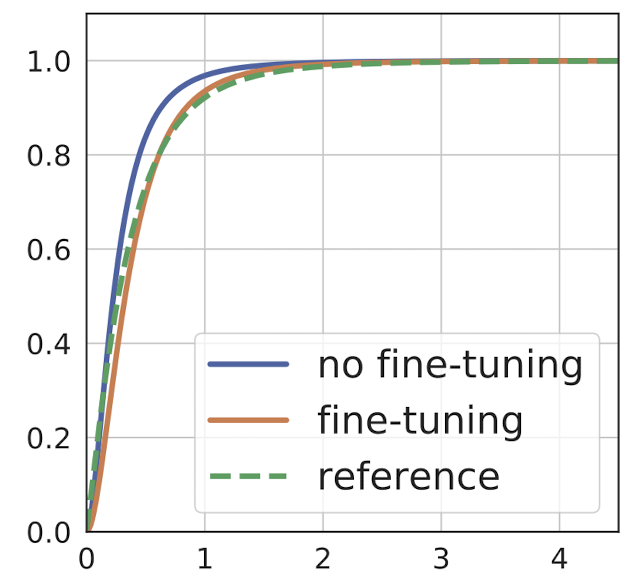 The dotted green line in the image shows the distribution of activations when using the same resolution of images for training and testing.

The blue line shows the distribution when we use larger images for testing without fine tuning the last batch normalization layer.

The orange line shows the distrbution after the last batch normalization layer has been fine-tuned. It shows a distribution that is almost identical to the dotted green line.

We will now test the effectiveness of this method using the Cassava leaf disease classification dataset from Kaggle.

We will first train a baseline model and then compare its performance with another one we train using the FixRes method.

The train-test split being used was created in a Fastbook reading group and can be found here.

We first create a Dataset for the data.

We then define the augmentation we'll use during training and testing.

As you can see, we use RandomResizedCrop during training and CenterCrop during testing with the same size.

We can now create training and validation datasets.

The next step is to create data loaders for these datasets.

We create an instance of a resnet50 model that we will use.

Since ResNet-50 is trained in ImageNet, it has 1000 outputs.

We now train the model for 10 epochs using the AdamW optimizer with default parameters.

The first way to use FixRes is by increasing the resolution of images at test time.

We can then plot the different test sizes against the accuracy of the model to understand how the resolution of images at test time affects model accuracy.

Note that using Resize (1.25 * 224) + CenterCrop (224) gives a higher accuracy than using just CenterCrop (224). This shows that the size of objects seen by the model is indeed different at test time and has an adverse effect on the accuracy.

Also note that we have obtained a better accuracy from the model without even fine-tuning the model at a larger resolution!

Let us now fine-tune the last layers of the model at a resolution of 384, since that's the resolution at which the model performed best.

By passing fine_tune=True to the train method, we ensured that the entire model was in eval mode and just the last BatchNorm layer before the pooling layer was in train mode.

We could have used images with a lower resolution during training instead of increasing the resolution of images during testing.

Training the model with these resolutions is left as an exercise for the reader. 👀

The FixRes method can also be used with transfer learning. The authors mention that when fine-tuning a pre-trained model, they do the following:

We will try this approach with fast.ai.

The code that follows was inspired by @morgymcg's experiments available on GitHub: morganmcg1/fastgarden

We will continue using the same dataset and the same train-test split described at the beginning of the PyTorch experiments.

We create a ResNet-50 with pretrained weights and then train the entire network at a resolution of 224x224.

We then freeze the earlier layers of the model and fine-tune the last layer with a higher resolution.

As a result, the model sees objects of different scale during training and testing. This is a problem because CNNs are not scale invariant.

This can be remedied by training with smaller images, or testing with larger images.

However, using images of different size at train time and test time negatively affects the classifier layers of the CNN.

To address this, we fine tune the last few layers of the model, including the batch-norm layer preceding the global pooling layer at the higher resolution being used at test time.

This approach can be used when training a model from scratch and also with transfer learning.